Hello everyone and greetings from Deauville, France!

It is D minus 2 and I have concluded my own version of "The Longest Day" after getting only 2 hours of sleep last night and running around all day.

Wednesday, we worked our way south to Portsmouth with a brief stop at the Royal Air Force museum where they primarily salute the "so few" who are owed "so much" by "so many". Like I previously mentioned, the RAF won the Battle of Britain and prevented a seaborne invasion by the Nazis by defeating the vaunted Luftwaffe in a huge upset with the use of radar, just in time information, as well as pure grit and hustle. They are the best home underdogs since Michigan defeated Ohio State in 1969. It really was "their finest hour."

After a brief stop at Southwick House where Ike made his gutsy "Go!" call we settled into Portsmouth. Southwick house is under new management since last year and the Royal Navyu no longer does the tours. Too bad - there are BBC cameras everywhere as every zipperhead in England and Freance, as well as the US are doing stories on the 60th anniversary of D-Day.

At dinner, we met a nice couple from England who are Jack and Betty's friends - Ted and Joan. Ted was British Airborne and saw action in North Africa, Italy, and Greece as a member of the 2nd Independent Parachute Brigade after originally being attached to the British 1st Airborne Division "Red Devils". He was initially disappointed to have missed Operation Market Garden unlike the rest of the Red Devils but after hearing of the huge losses (only 2000 escaped out of the 10000 that made the jump into Arnhem, Holland) he was relieved. Even at 85, he looks like he can still fight but while proudly explaining to me his illustrious combat record, he was promptly put back in his place by Joan who very sarcastically interrupted - "only the BEST were allowed in his unit, starting with this one!"

They met Jack and Betty at an airborne reunion in Atlanta and drove 30 miles to spend time with their American friends. Joan and Betty talked about the homefront during the war - something I am learning about more on this trip. They mentioned how despite the rationing (one egg per person per week, very small chunks of cheese and meat, no stockings for the ladies, and having to grow their own vegetables in their Victory Gardens), it was a great time for them to grow up. Joan particularly liked the dances as she had her pick of British, Canadian, South African, US and other Allied boys.

I've met many other veterans in our tour and most have some great stories:

Phil and Joy Reed of Whittier, CA met while Phil was an Landing Craft Infantry (LCI) driver who shuttled British infantry to Sword Beach on D-Day - his first of 25 round trips he made from June 6 to October. Joy was only 15 and Phil only 18 but the persistent Phil plugged away even after the war for 3 years until Joy finally left her home in England to marry Phil. Her father promised to pick her up if things did not go right but he has not had to, even to this date.

Frank van something from outside of Chicago was an anti-aircraft gunner who landed at Omaha Beach with the 29th Infantry Division and saw continous action until the end of the war. He did not face much enemy aircraft later in the war as the Luftwaffe was on its last legs, but he did, at gunpoint, demand his British landing craft driver to land them to where they were assigned to go. The driver had refused as it was a "hot" landing zone.

Colonel Elbert Legg of the 82nd Airborne Division "All-Americans" landed as a sergeant with the 325th Glider Infantry Regiment. These cats came in on fiberglass and wood gliders that crash landed every time by design. He also had what I thought is the worst job in the military - graves registration - tagging and counting bodies. After the war, he went to college and rejoined the army, got his commission and stayed on - retiring as a Colonel after several stints in the Nam. He is pretty old - even for these standards - and he moves slow and deliberate but still has a "presence" when he enters the room. He is always dapper in his non-wrinkle khakis, buttondown, and blue blazer every day. I think of Paul Sorvino in "Goodfellas" except he is a good ol' boy from North Carolina. 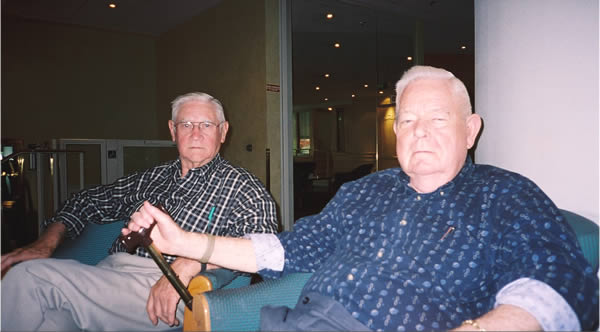 His wife sat next to me at dinner one night and was initially very cold but later really warmed up. She is very protective of Col. Legg and takes care of him in everything.

That is one thing I am noticing about the veterans' wives. They all have great personalities and provide soft comfort to their men yet also exude a great deal of strength as they also had a great part in winning the war and rebuilding the world. Mrs. Legg graduated from WVU and had a long career and Jack's wife Betty worked at the telephone company for many years, where she met Jack.

Jack also had his two daughters meet him in Normandy. One, Lynn, said that it was interesting hearing about Jack the soldier because she just knew him as "Dad". Betty chimied in with "I just knew him as a pain in the àçé&".

Thursday, we finally arrived in France, my favorite country (insert sarcasm here). After a brief trip to the Portsmouth D-Day Museum ( we were going to stay longer but Prince Charles had booked the place and we had to vacate), we made a stop at the HMS Victory which celebrates Lord Horatio Nelson. A top Naval admiral, this cat lived quite the scandalous life. He abused his wife and had an open affair with another man's wife. Today, the media would have ate him up for lunch but back then, I guess it was ok in being a national hero.

We took a ferry to Ouisterham on the eastern extreme of Sword Beach and disembarked. The ferry was not really a novelty since it is really more of a regular means of transportation for Brits to cross the channel.

Last night, we met up with the Band of Brothers veterans who were waiting for us at the hotel. Earl "One Lung" McClung, Paul Rogers - both from last year's trip, as well as Amos "Buck" Taylor and Darrell "Shifty"Powers were there. Some of us stayed up pretty late with Earl at the bar. He mentioned how he did not want to visit any more cemeteries as that is when he gets very sad and emotional. Shortly after some of his buddies were killed, he never got very emotional as he looked at them and thought that in an hour or so, he could be joining them. However, 60 years later, it tears him apart to see the crosses of guys like Terrence "Salty" Harris and William Kiehn ( whose death in Haganau was so badly portrayed in the miniseries - a direct hit from an artillery shell blasted the room he was sleeping in after he had pulled the 4-6 am watch - not he got hit while carrying a sack of potatoes like in the movie).

Earl thought it was weird for him to think that way until he shared his feelings with Paul, Shifty, and Jim "Moe" Alley, who all shared the exact same thoughts.

We went to some Band of Brothers, Easy company sites. First, St. Mere Eglise which looked like a gigantic street fair, only with an WWII Airborne theme. This is where Earl and Paul landed on D-Day and captured and defended the village, fighting alongside the 82nd Airborne troopers under Lt. Colonel Edward "Cannonball" Krause.

We made a brief stop at Carentan and the crash site of plane no. 66 which carried Easy's commander, Lt. Thomas Meehan. We then reviewed Brecourt Manor in which Easy company, with 13 men total destroyed 4 big 105mm artillery guns that were firing on to the boys at Utah Beach where the 4th Infantry "Ivy" Division was landing.

Finally, we stopped in Caen, on the British sector, which Monty had promised on D-Day but actually needed six weeks to take, for a visit to their museum and dinner.

Overall, logistics, traffic, and general density of the crowds have made this trip much more challenging than last year but what did you expect? some of the natives have gotten restless but they should all just chill. Imagine me of all people saying that!

Finally, I will finish tonight's entry with a list of Jack Agnew-isms;

"Limey" - British soldier
"Limeyland" - England
"Weirdo" - homosexual, as in when a first timer male tourist asked Jack for an autograph and offered a hug in exchange after seeing some women do it - "I don't need a hug from you - I'm not a weirdo!" As heroic as Jack is, PC has not quite hit him.
"Mother" - his wife Betty
"Woman" - his wife Betty, but as in "hurry up and get on the bus, woman!"
"Brass brassierre" - whenever he sees "Brasserie" in France he points this out

Tomorrow is D minus one and we will be headed towards the beaches. Rangers, lead the way!
Ted